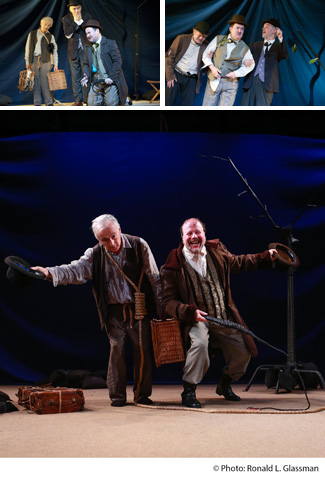 New Yiddish Rep’s groundbreaking “Waiting for Godot” in Yiddish is still wandering. The critically acclaimed version of Samuel Beckett’s absurdist masterwork, which many have called a revelation for unlocking a trove of hidden meanings, had its four-week world premiere at the multicultural Castillo Theatre in September 2013. The surprise hit of the 2013-14 season would then go on to open the 3rd annual Happy Days Enniskillen International Beckett Festival in Northern Ireland in the summer of 2014.

The production, directed by Moshe Yassur, then came back to New York in the fall of 2014, this time at the invitation of the 7th annual Origin’s 1st Irish Festival. This acclaimed run at the Barrow Street Theatre allowed New Yiddish Rep to bring into even sharper focus a unique dual Irish-Jewish resonance that many were detecting.

Media Blitz engineered an international press campaign for the show’s premiere in New York through its Northern Ireland premiere and its return to New York as part of the Origin 1st Irish Festival.