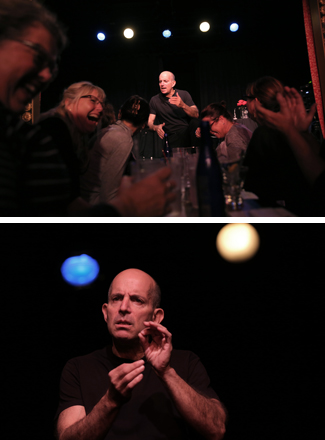 The hit comedy “My Son the Waiter, A Jewish Tragedy” — Brad Zimmerman’s self-skewering account of three decades of underachievement as a beloved bad waiter — ran Off-Broadway for an exhilarating 15 sold-out months. Helped by Media Blitz’s sometimes unorthodox promotion of the production, an estimated 12,000 mothers were proud to say that Brad is not their son.

After its farewell performance at The Triad on New Year’s Eve 2015, the show went on an extended national tour lasting close to two years.

A unique hybrid of long-form stand-up and theatre, “My Son the Waiter” was produced by Dana Matthow and Playhouse Productions. The NY Times described the show as “Delicious, distinctly original and bittersweetly on target” AND “powerfully poignant.”