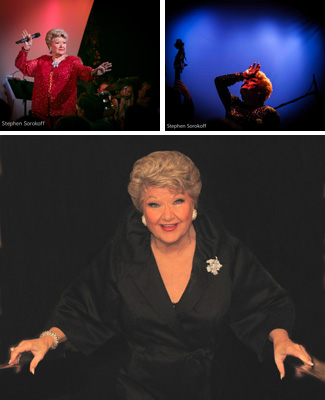 A pure proponent of the elegant nightclub style that once was the hallmark of large rooms and nightclubs across the country, Marilyn Maye has amazed a growing number of critics with her seemingly undiminished abilities. Stephen Holden of The New York Times has marveled that she “dives into jazz and swings with a vocal stamina remarkable for a performer of any age.”

A Kansas City native and resident, Maye was nominated for a best new artist Grammy in 1965. She appeared a total of 76 times on “The Tonight Show Starring Johnny Carson” (the most appearances by a singer).

Media Blitz helped engineer what Rex Reed of The New York Observer called “one of the most triumphant comebacks of the decade…” from her return to New York in 2006, through her celebrated 2007-17 run at the Metropolitan Room. There she built a new following that continues to sustain her, and Maye is still going strong at 91.

This year (2019), with Media Blitz’s vital support she has added Minneapolis to the list of US cities she has captivated during this odds-defying late-career surge.